Recently, we tried to eat money.

Around autumn we planted tens of thousands of dollars,

And spent thousands more to fertilise and water our cash crop,

But the millions did not grow.

So we turned to digging it all back up,

And in the process we discovered gold.

So we tried eating the gold,

But it was too heavy in our belly

And we just shat lead;

Which it turns out we could swap with our neighbour,

Who had been trying to eat coal.

They tried eating gold with coal,

And gave us a go at their reserves of oil.

So, we refined the oil, and we even put in salt and sugar,

As the taste for oil is an acquired one,

And our palette was not accustomed to the crime.

After the oil we found shitting to be very difficult indeed,

So we ate a huge amount of woodchips

But all it produced was gas.

By now things were getting quite dire,

And we visited our neighbour to see how they were getting along.

We found them drinking the most blackened and foul of waters,

And they were very near the end of their life.

‘And there’s only one thing left.’

‘What’s that?’ we implored,

‘We shall have to try, eating bullets.’ 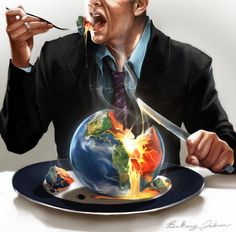