I finally met God today.
He rang a few days ahead to see if we were still on.

When I answered the phone he didn’t say who he was, he just said he was gonna come fix the mill.

‘Ah’, I said, ‘it’s God, without whom we have no water,’ and he just laughed down the line.
Dad had told me about God, but I expected him to look a bit different. He was seventy-something with white sideburns, and thick dark eyebrows that framed the top of his glasses and shaded his sunken blue eyes. His six-day handshake could’ve shaped the world and he wore a broad grey hat.

‘Let’s get into it,’ he said, nodding towards the old 26-foot windmill with its worn-out buckets and farmer’s heartbeat.
God pulled his truck up in the shadow of the mill and the 16-foot Wheel of Life whizzed above us in the strong breeze plumbing the bore and the Great Artesian lifeblood 1000 feet below- without which this whole country would simply pack it in and die.

The sun was already chewing our necks and biting at the back of our hands.
God got straight to it winding out a great length of hemp rope and running it through a pair of old pulley-blocks.
No sooner had I unbolted a few struts to open up access to the Farmer’s Tabernacle, and wound the Comet’s tail out of the wind, and God was up the mill tying off the great Wheel of Life and pulling up the block and tackle.

Little spurts of the earth’s clear blood dripped and splashed out the top of the borehole, and a small bog-eyed, brown frog leapt into a wet cow print deep as a coffee mug.
‘Right, you’re in charge of putting things away and don’t bloody drop anything!’

Then it was all a blur of spanners and shifters and Stilson’s and hessian bags and chains and nuts and bolts and grease and big old Chain Stilson’s and a whopping great cast-iron jaw vice for biting into the 30-foot lengths of pipe, that we were now hauling out of the cool earth’s buried veins by block and truck and tackle, with the devilish hot wind whipping dust up all the while and coming down on us with the promise of a deeper drought.
‘What do you make of that Adani coalmine then?’ he coo-eed from the toolbox.

‘Well, if it was farmers asking for a billion dollars and free water,’ I said, ’you know they’d tell us to go to buggery’.

‘Yeah,’ he said, ‘those mongrels are as corrupt as the day is long’.

‘You know on a clear day in Canberra you can actually see the lobbyists hanging out of the politicians arses?’ I said.

‘Ha!  Well I don’t watch the TV,’ he replied, ‘I’ve got a really, good video collection. I like to recite a bit too y’ know? Lawson and Banjo. I reckon that Lawson was a whinger… I do listen to the FM sometimes, the Bush Telegraph, but once they start carryin’ on, it goes off. Never mind that I’ve got a doctorate in psychology but choose to fix windmills’- he winked- ‘it’s all rubbish’.

(I didn’t think to ask God what he thought of Islam but I knew he was a churchy type and even a bit racist and homophobic- but what old God isn’t these days?)
Then it was ‘Pass me this, and pass me that. Tie that off. Grab that rope. Look up and live boy. Where’s that shifter? Scurry up will ya? Centre that bloody pipe. Cut! Hold that. Don’t move it, I’m the boss! Good work boy. Back down here. Wind that vice off. Hook that block on. Pull her up. Move that bloody rope off. Cut! Lock that vice on. Quickly. Up you go again. Unhook her. Hold! I said bloody hold! Right, now let her go. Good! Back down here darling.’

Then God called smoko, and we chewed the fat some more.

‘What d’ ya think of all that Coal Seam Gas stuff?’ I asked.

‘Fuck em off! We don’t need it! Y’know bores out here have dropped 10 metres in recent years- not feet- metres! I’ve told em they need to stop it cos cities like Dubbo will just dry up altogether, and what do you suppose has happened to the rest of the state by then?’

‘Do you believe in ghost towns?’

He let out a laugh.
Then it was back to work pulling the last length of pipe up and removing the pump from the foot. When God uncoupled the pump and exposed the worn out buckets you could see why the tanks were starved for water and the mill was drawing so poorly.

‘Well, well, well,’ he said, ‘I think we can fix this up. Luckily I’ve bought some spares -made in Australia even- that’s how bloody old they are’, he winked.
God fiddled about at his workbench and replaced the buckets, cutting the lips back a bit with his pocket-knife to draw more suction, then it was time to do the whole exercise in reverse.

By the time we’d put the pump and four lengths back down the bore hole and into the cool, dark earth with its Great Artesian Waters and locked the neck off with the jaws of that huge vice, God called lunch.

We washed our hands in an old tin bucket and poured tea.

We talked a bit more about the state of the world, and Australia.

‘I don’t think we were ever chimps,’ said God, ‘but man’s the worst kind of animal we’ve got; man’s inhumanity to man…’

And with this the day grew fouler still and though we nearly had it licked, the wind changed.

God grabbed the big, old Chain Stilson’s and got to wringing the neck on the top pipe to fit the head back on, loudly reciting Banjo as he went, like he was taunting the wind itself.

‘Now the stock have started dying, for the Lord has sent a drought,

But we’re sick of prayers and Providence – we’re going to do without,

With the derricks up above us and the solid earth below,

We are waiting at the lever for the word to let her go.

Sinking down, deeper down,

Oh, we’ll sink it deeper down:

As the drill is plugging downward at a thousand feet of level,

If the Lord won’t send us water, oh, we’ll get it from the devil;

Yes, we’ll get it from the devil deeper down’. *

While up the mill I looked anxiously out across the dry land. Cows and calves were hunkered down under Wilga trees; Apostle Birds shrieked alarm in an old Eumung; tumbleweed migrated across the brittle fields of golden wheat stubble; a young carcass sunk into a carpet of maggots; a whiff of smoke blew in from Nyngan afar; a drunken crow cart-wheeled in the hot wind; the whole sky was washed blue-brown, with high, white smears of Cirrus cloud, and an enormous red storm-front of dust billowed like a land-cloud, up and across the horizon towards us.

‘Well, now we can bless the drums of war!’ cried God, ‘the Indonesians are coming!’ and he winked.
‘Pass me the rod and we’ll see if she lives’- and we reattached the rod that links the mill to the bore pipe and the pump 1000 feet below.

The air by now was hot and dry like the breath from Hell’s own oven, and I scurried to pack things up, winding the hemp rope off the blocks and onto its wheel, putting the shifters, spanners, Stilson’s, slings, chain, hammers and grease pot back- then the Almighty Vice itself- while God flew up the mill again and untied the Wheel of Life from its hitch.

As he cleared the landing and found the ladder he called to let her go, and I turned her on – unwinding the winch that had the tail pulled aside to let the Wheel of Life face into the devil’s hot wind.
The mill trotted to a canter, then a steady run.

‘Let her go!’ yelled God, and I let the reigns slip into a gallop, and lo! The water poured as the pump gulped up and down in the black depths of the Great Artesian!

And God above let out a great, gleeful laugh and cried:

‘If the Lord won’t send us water, oh, we’ll get it from the devil;

Yes, we’ll get it from the devil deeper down!’

(Excerpt from ‘Song of the Great Artesian’ by Banjo Patterson). 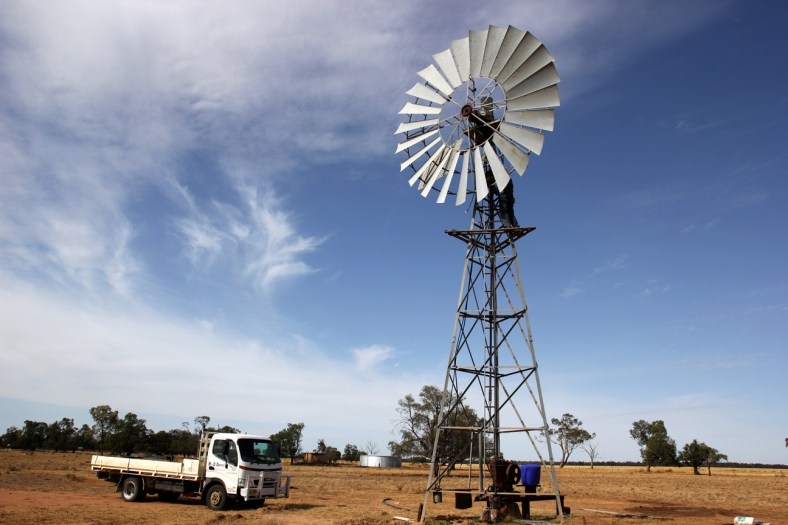 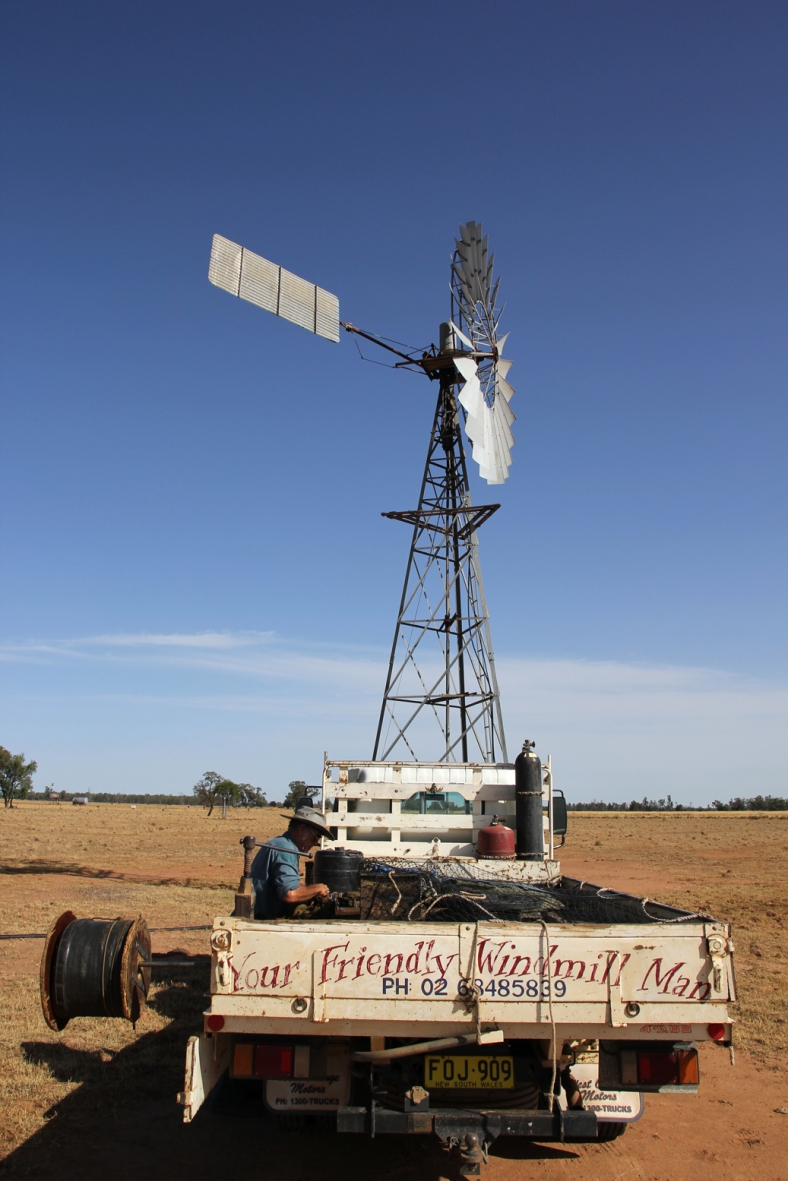 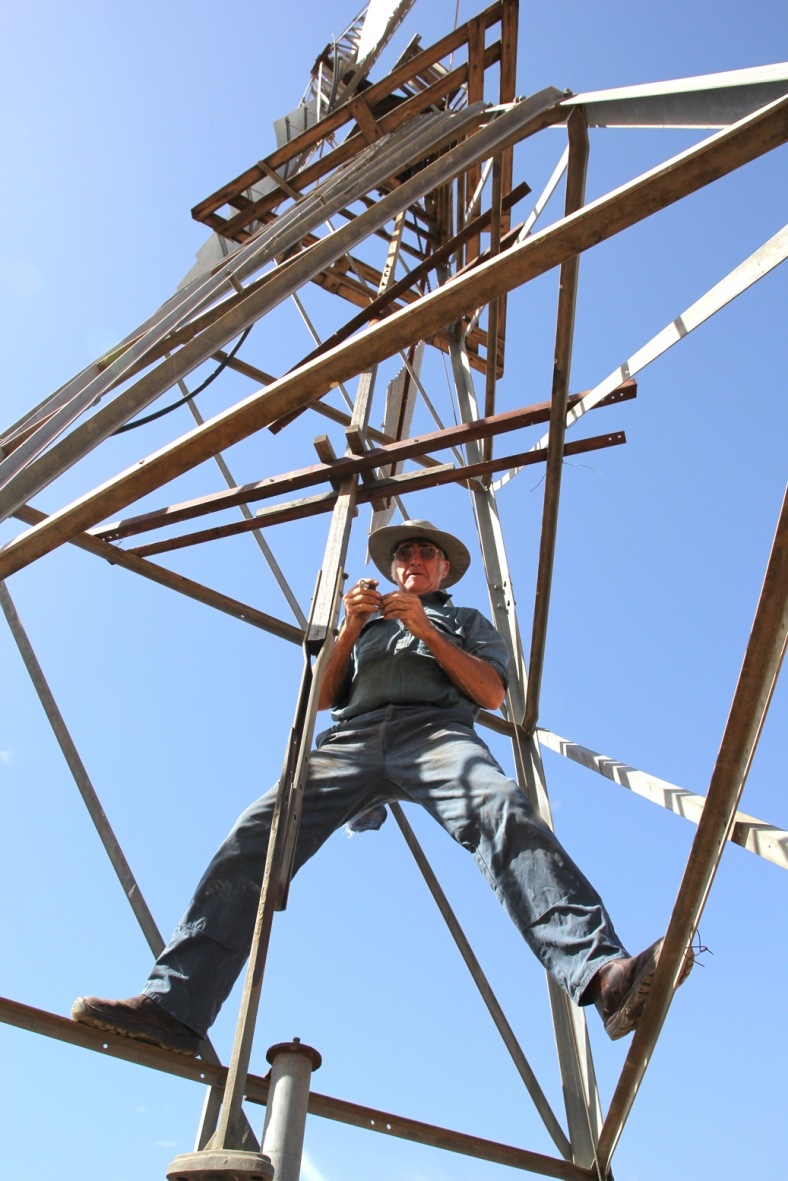 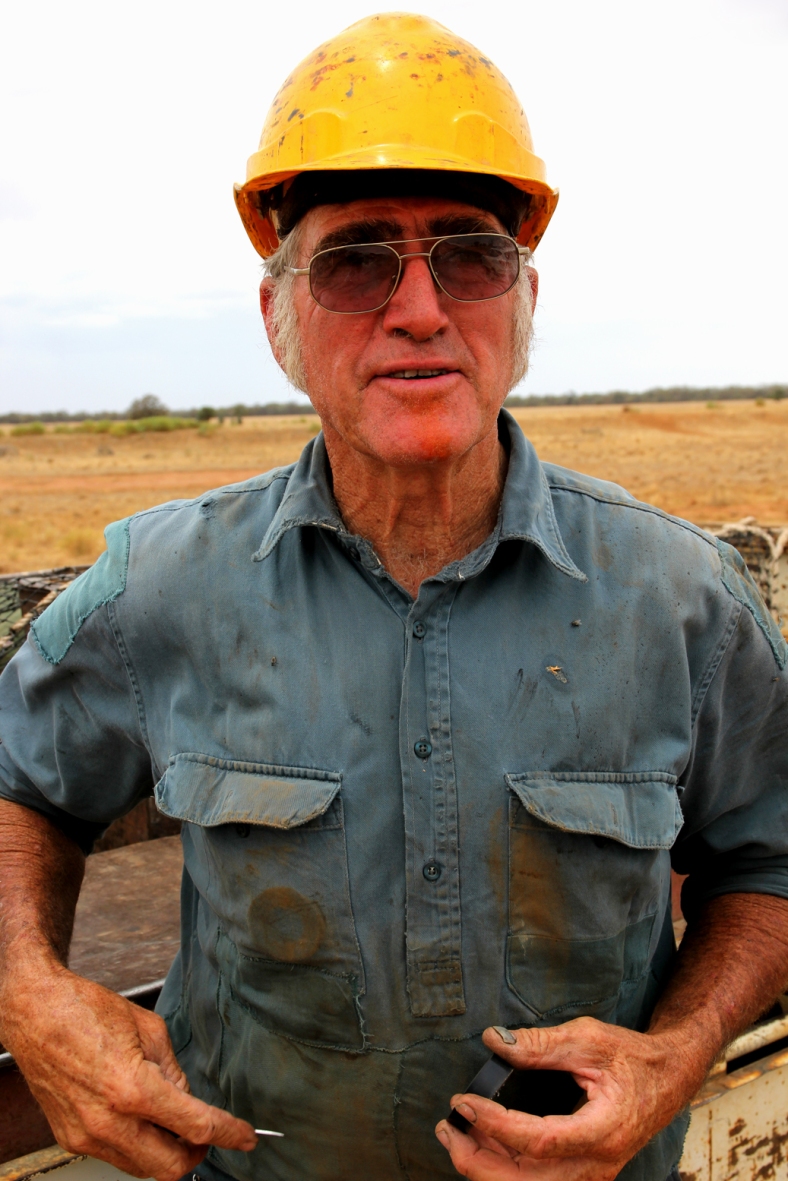 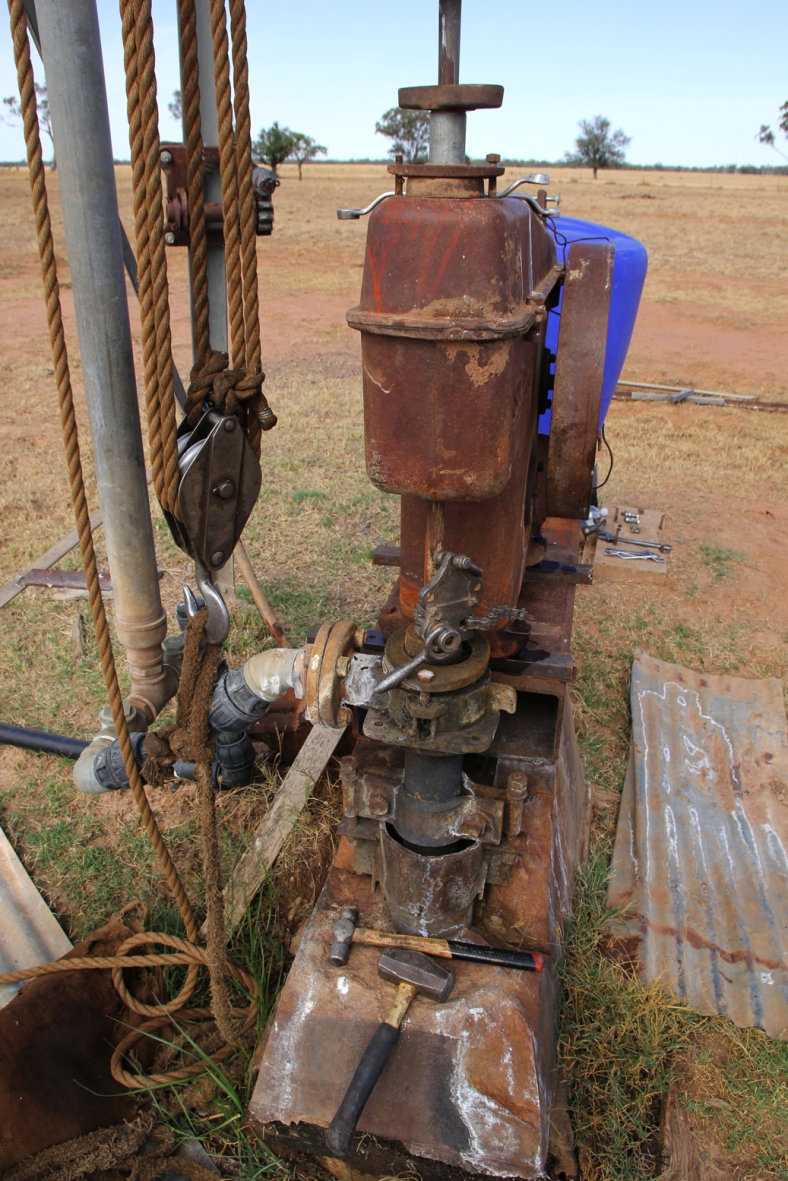 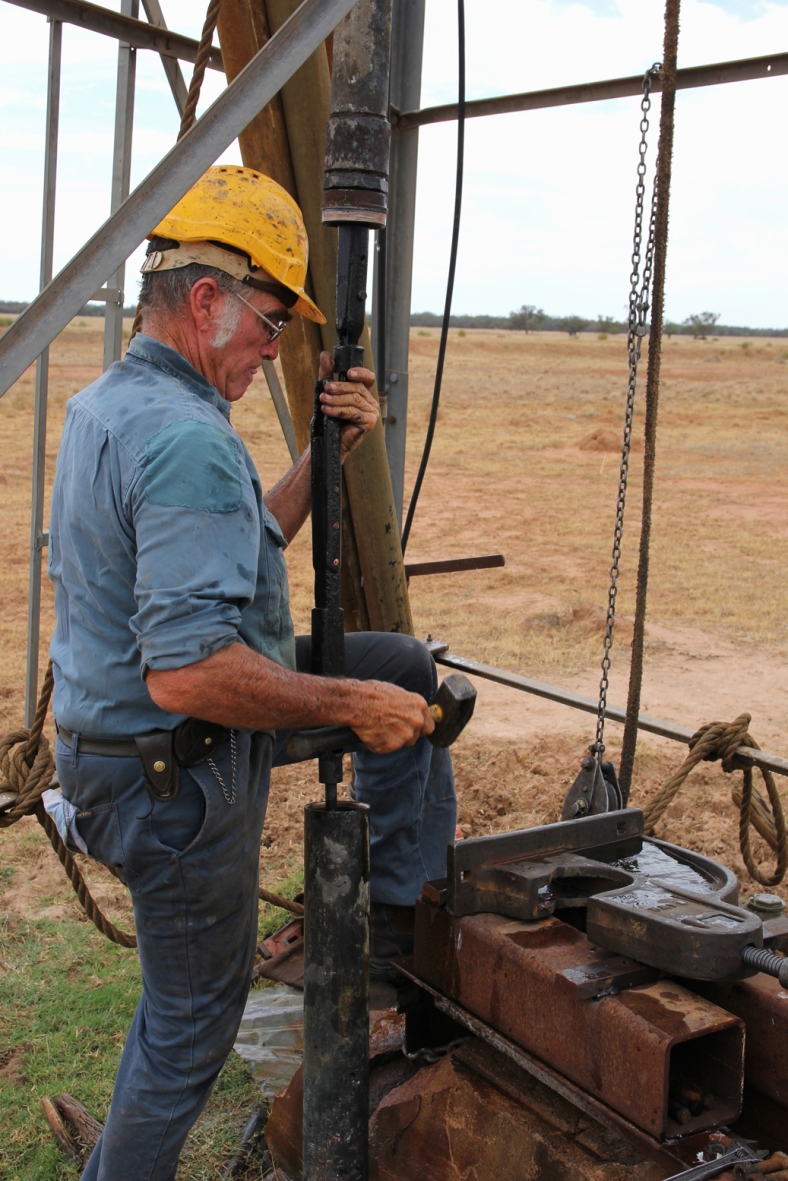 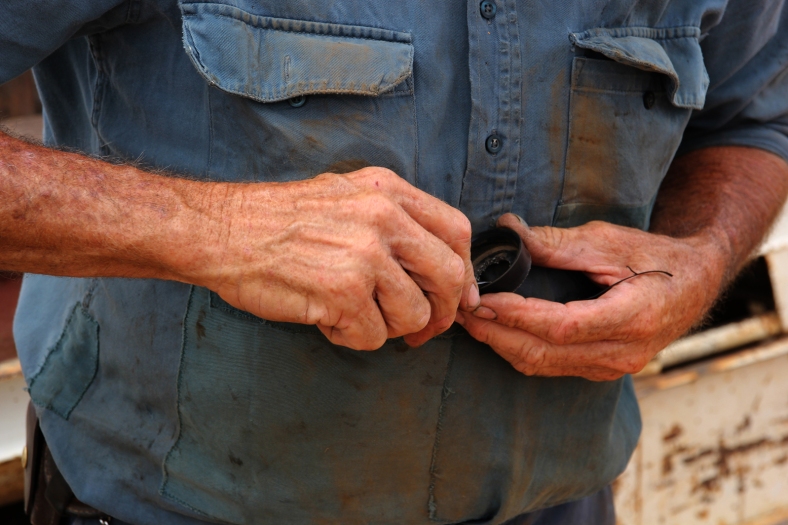 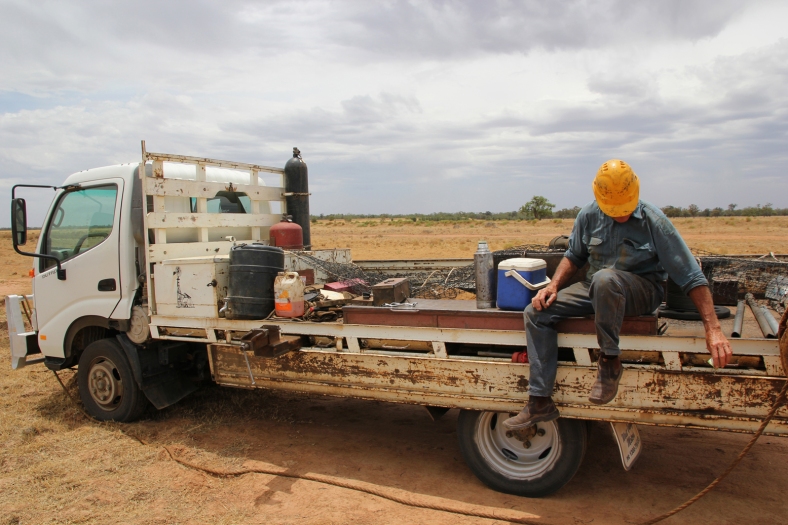 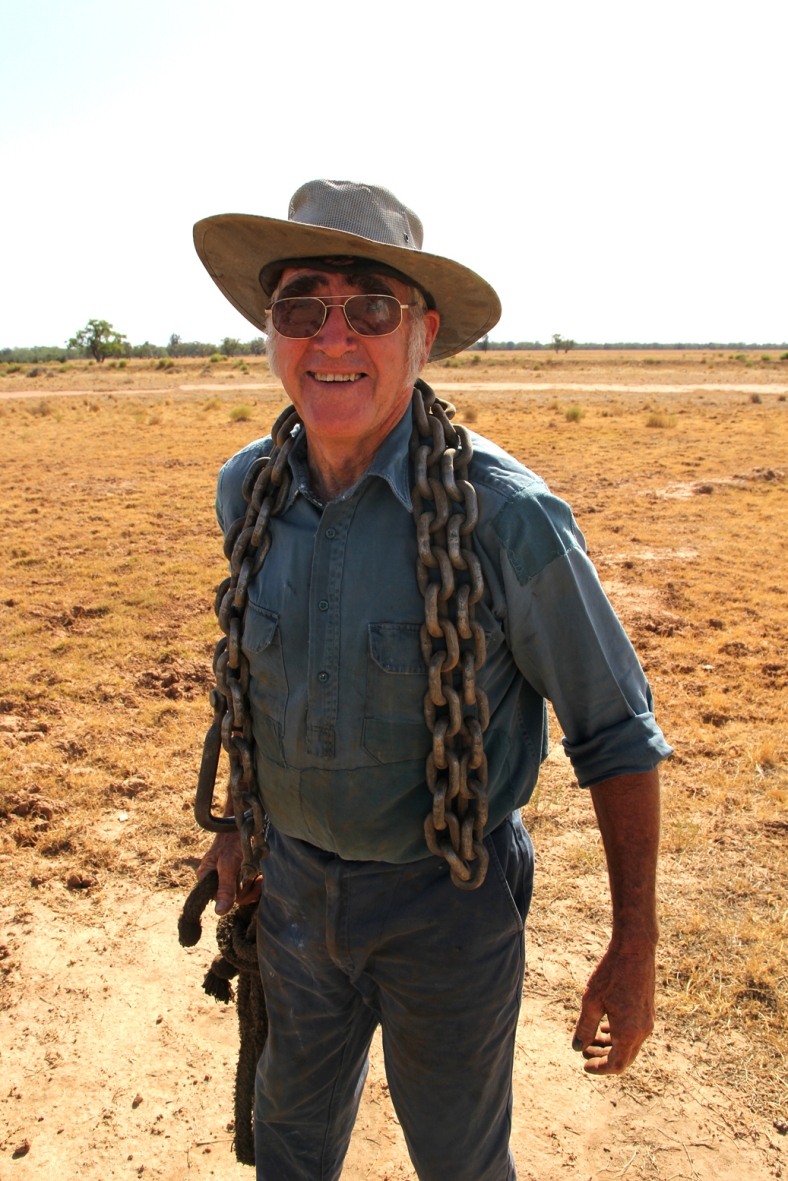 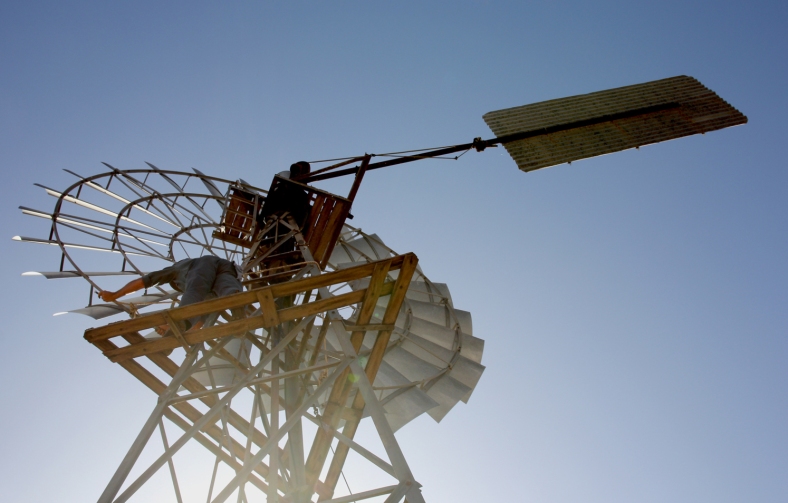